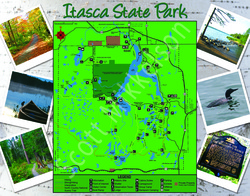 Click on the picture to enlarge
The Pre-Ride will become the Post-Ride! This part of the ride has been postponed until later this summer. This is an overnight trip to Itasca State Park and then following the Mississippi River down through Minneapolis. It wasn't possible for us to get this section of the ride completed as we intended because of scheduling issues and some cool rainy weather. I will update this section of the Mississippi River Ride later this summer after we complete it. 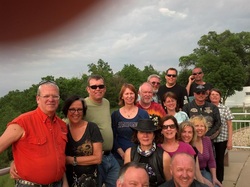 We officially left on our ten day trip June 15, 2013, with the Wild Prairie HOG Chapter. This is a scheduled chapter over night ride to Galena, IL. This chapter ride conveniently fit in perfectly with our first day of our ride along the Mississippi River. On Sunday the other HOG Chapter Members headed back to Minneapolis and Jeff & l continued south looking for more adventure along the Mississippi River. The finger you see in the upper left corner is Bob's. He was a very nice older gentleman that agreed to take our group picture in Balltown, IA.  We ate dinner at Breitbach's, Iowa's Oldest Bar and Restaurant! After dinner we all walked about a block to the valley overlook. Bob, who had also been at Breitbach's with his wife for dinner conveniently stopped by the outlook and agreed to take our group picture.