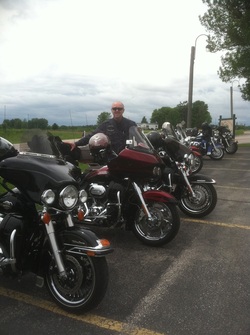 Departed Wild Prairie 9:30
Had Lunch at the Amish Cafe in St Joseph
Dinner was in Balltown at Iowa's Oldest Bar and Restaurant.
Later on the ride, a bee (presumably) met a quick death on Jeff's windshield, gave Jeff a sneezing fit, red eyes, and laryngitis. Lee and Jeff headed off to find a drugstore and continued south to Savanna, while the rest of the Eden Prairie HOG Chapter members headed for their hotel in Dubuque, IA.
Lee and Jeff arrived at the Pallisades Park and campground just north of Savanna at 9pm and had the pleasure of setting up camp in the dark! OK, we did use flash lights, however the bugs just about drove us to a hotel.
Total distance ridden that day was 350 miles. 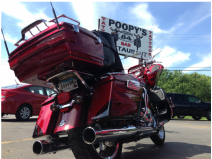 Sunday, June 16, 2013
Jeff and Lee left campground the next morning at 8:30 (no showers :-( )
Rode to Poopy's for breakfast (they have showers!), but we just decided to skip showering that day.
The ride that day was awesome! We rode from Savanna primarily down the Illinois side with a diversion to Clinton, IA, back to the Illinois side and then another crossing to Muscatine, IA. Back over to the Illinois side, we made our way to Dallas City where it was indicated that the River Road, Hwy 96, was closed ahead. We took the detour which may have been misleading as we never saw another detour sign. The road we found ourselves on was inexplicably covered with gravel in random areas and sometimes entirely covered with gravel. We came across a gravel pit presumably the source of all the gravel. Minutes later we ended up on the "Chicago, Kansas City Expressway" which led us to Hannibal, Missouri for the night.
Just south of Hannibal we found Injun Jo's Campground which is right on US61. Our campsite had a clear view of the roadway so it was very noisy. It otherwise had the requisite amenities: a pool and showers. Oh, yes, and the worst smelling bathroom in a three state area. Needless to say, Injun Jo's Campground is a place we would suggest you avoid. One positive point for Injun Jo's...No bugs.
Total distance for the day 277 miles with a total of 627 miles for the trip so.