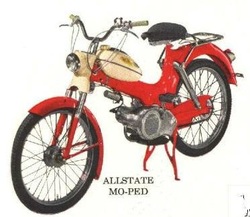 My first motorcycle was a "very" used Sears Allstate Mo-ped. It might have been a 50cc built in about 1959-61. Back in 1964 the family took very few pictures so I don't have a picture of my bike. The picture here is very much like the one I rode. About this same time several of my friends were riding Honda 50's and Honda 90's. I finally lost interest in motorcycle riding the follow year and my dad purchased a used blue Chevrolet four door Biscayne that became the second family car and mine to drive on Sunday afternoons. 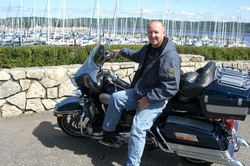 In June of 2008 I purchase my first Harley Davidson motorcycle. It was a used 2002 Classic with about 32,000 miles. The previous owner had added a tour pack, additional chrome and some other accessories. Both of my sons had purchased a motorcycle and I decided it might be fun as well. I did some riding around Minnesota and along the Mississippi River down to La Crosse, WI, and rediscovered the the joy of riding again. 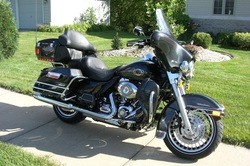 I purchased this bike in September, 2008. In the next two years I put over 25,000 miles on this bike. Mostly touring the Smokey Mountains, the USA Rocky Mountains and the Canadian Rocky Mountains. It was at about the 5,000 mile mark on this bike that I really felt like I had become one with the bike and the ride. The larger touring type Harley Davidson motorcycles weight over 900 pounds. And that's before filling the gas tank and the tour packs! 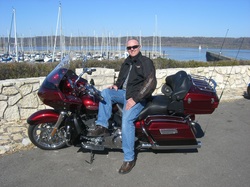 This is by far my favorite Harley Davidson "big boy" bike. It has all the necessary accessories and it is just a dream to ride. I started riding this bike in April, 2011, and by the end of November, 2012, I had ridden 26,000 miles.
If my plans work out I will ride another 15,000 miles every summer going to places I have never been before as well as riding to some of my favorite places like Cody, WY, Olympia, WA, Yellowstone Park, the Bear Tooth Highway and of course the Black Hills.