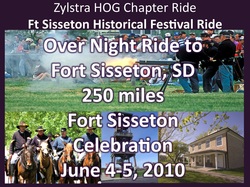 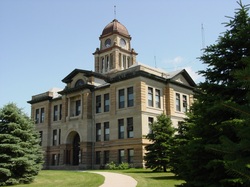 Marshall County Court House in Britton, SD
The first big ride of the year started June 10, 2011. I headed west and made it to Britton, SD for the evening. I was able to stay with my parents and then left at 5:30 AM for Cody, WY the next morning. 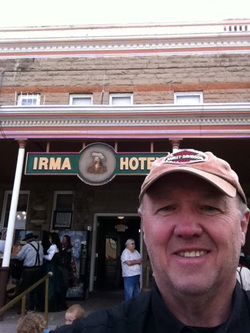 June 11, 2011 was one of my longer days on a motorcycle. It was 740 miles of intense riding and only stopping for fuel and a quick snack.

I reached downtown Cody, WY about 6:45 PM, just in time to see the ending of the Irma Hotel "Gun Fighter" show.

The shooting ending with my brother-in-law Richard Muscio taking a bullet in the heart (I think he was playing a bad guy)! Fortunately for me he came back to life when the gun fight was over and took me out to dinner at a nearby restaurant.

Click Here for more about the 2011 ride to the west coast. 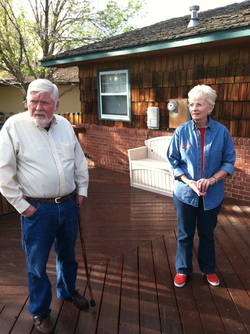 I hung out with Richard on Sunday. I slept in and then we headed for the local cafe called "Our Place Cafe" for breakfast. Richard and I then decided to take it easy the rest of the day. That evening Richard barbecued hamburgers on the deck. Richard invited Tom & Connie over to help us eat them. Tom is one of the Irma Gun Fighters and he had mentioned the evening before that he wanted a piece of cherry pie.  We surprised him and had cherry pie and ice cream for dessert after the barbecue.

My sister Marla was on her way to Britton, SD, so she missed out on the fun in Cody. We missed her, but I would catch up to her later at Langford, South Dakota's 125 Year Celebration. More about that event a bit later.

Lee and Richard at Our Place Cafe! 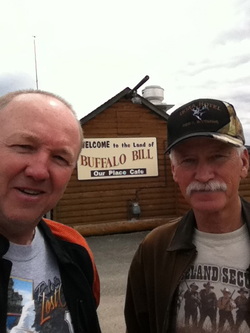 Yes, Richard and I finished breakfast before twelve noon that day.

If you visit Cody, WY, I would suggest you plan to have breakfast at Our Place Cafe on the west side of Cody. 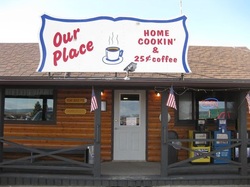 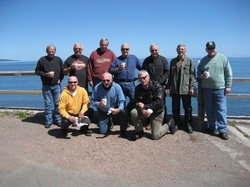 I was fortunate to be able to join the MWR group on several rides. The MWR group meets every Wednesday morning for a breakfast somewhere in the Twin Cities area. After a hearty breakfast the group hits off on a planned ride to a distant location for lunch. A typical Wednesday ride is 200 plus miles. Here is a picture from from our trip to Thunder Bay, Canada. 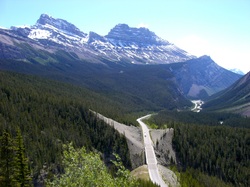 Planning for the 2011 riding season has taken on a new level of excitement for me. In the last several years I have been able to experience the beauty of our country on two wheels. Touring the country on a motorcycle offers a look and feel that you just can't get from a car. Along with the view comes the smells, the changing temperatures the lighting and the more than 3-D openness that is available while riding.

Ride and Have Fun

As spring approaches I am starting to plan out some rides and destinations. The first major ride will be to Olympia, WA, to visit our son Rich. That will take place in June.

There will be the HOG Chapter rides, CMA rides, and some fundraiser rides as well. I have a school reunion back in South Dakota to attend, visit some friends and relatives, and hopefully add Sturgis Bike Week to my riding itinerary.

Recently, Grant Burgstahler, a new friend, e-mailed me a link to a website listing the top fifteen scene rides in the USA Chosen by AMA readers. That's enough inspiration to get on the road and ride!
The 15 Best Road Trips in America- Chosen by AMA Magazine Readers
http://www.fuzzygalore.com/category/road-trips/

If anyone visiting my web site has some ideas, please e-mail them to me: lwacaa@gmail.com

Thanksgiving 2011 in the state of Washington

On Thanksgiving Day we visited with Ryan & Melissa via Skype to their location in Haiti. Later that day we had our turkey dinner with Rich in Lacey, Washington. This was the first time he had a Thanksgiving dinner at his home.
Our trip to Washington included spending a day with with Bruce and Delores Alberts. We relaxed at their home after flying from Minneapolis. The next day we went out and watched the movie "Courageous" and had dinner at the House. Then Rich took us to Portland for some tourist type activities. We visited the The Vista House, a Rose Garden, downtown Portland, picked up a dozen donuts at the VooDoo Donut Shop and ate lunch at the Nicholas Restaurant (Lebanese food).